A forum for discussion of Second Age UO Shard

For ideas on how to make Second Age a better shard. Can it get any better? Maybe.
Forum rules
Posts in this forum are expected to be constructive, realistic and civil. Inflamatory or off topic posts will be removed.
Post Reply
90 posts

I think Horse Stamina should be addressed and taken with more serious consideration.

Horses ran out of stamina.. and quickly. You couldn't just run for 20 minutes straight without loss of stamina.

In fact they would run out of stamina so often, that they became a burden in PvP. Which is why the PvP players did not use them.

The Stam loss made for a more reasonable playing field for people that like to run from town to town without penalty. You didn't chase people from one town to another on a horse because the horse would never make it that far.

Horses were more a symbol of royalty and prestige, not used to run from Minoc to Vesper to Cove because you didn't want to die

I completely agree. I think horse stamina needs to be changed without proof.

The UO demo is the absolute worst proof for horse stamina.

Many people remember being on 26k and STILL RUNNING OUTTA STAMINA just from running from 1 part of town to the other end.

IT definitely needs to be addressed, and good point this is EXACTLY why lots of people were on foot.

Aye, this is certainly a known issue and we have tried pretty hard to get it right, however we're pretty sure the system is not currently working as intended. Comparisons between the demo and UOSA have shown that mounts do run out of stamina much more quickly there, even though we've copied the formula (or likely failed to correctly copy the formula).

The other issue with mounts is the ability easily to remount them when they have been attacked which should be addressed at the same time as the above.

"The text in this article or section may be incoherent or very hard to understand, and should be reworded if the intended meaning can be determined."
Top

Quite the contrary. The demo is living proof that a huge number of mechanics with in the t2a era used a lot of the same code even if it was slightly modified. Batlin and me have stated several times that there is a huge difference from the way horses run out of stamina there when you compare them here even though we are supposedly using the same code. This comes down to one thing, the current system on UO Second Age is broken at the moment and that it should be fixed eventually when the problem can be pin pointed.

Horse stamina on the demo runs out very quickly. For example, you can run from one end of Ocllo island in either direction and become fatigued a few times having to use the all follow me bug to refresh it each time. Doing this on UOSA results in many strides back and forth without ever having to refresh it.

There is no reason to bash the demo on this when the demo functions exactly the same way people have been ranting and raving about the issue here.

I agree that the UODemo is a great source.

However a slight modification can be drastically altering to any code and can cause a huge difference to the way an object responds.

Memory is still a usefull tool.

Horses do fatigue many times faster in the demo, I do agree that once it's correct they will become a nuisance. I agree that the UODemo is a great source.

However a slight modification can be drastically altering to any code and can cause a huge difference to the way an object responds.

Memory is still a usefull tool.


This doesn't really matter to be honest. You would be taking a pot shot in both cases. However, at least with the original code you would still be using the same code that made a modification instead of a whole different setup with the modification. The horse stamina issue is a great example. The way it works in RunUO is terrible at best compared to the way it works in the original code. The swing timer is just another great example. Two totally different concepts that were programmed differently. The swing timer is something that would never have been corrected if it weren't for the original code that allowed us to get the foundation.

There is a difference between using code that modifies an object and code that doesn't. Only an amateur would make such a simple mistake taking the demo over everything else without considering the possibility of a change.
mYm - Red Knees & Great Suction Capacity

I know it's anecdotal, but:

I remember having to walk with my horse to not fatigue in UO:R. I had to be really careful because if I ran for a short time (less than a minute) and then ran into a group I could have screwed myself on stamina. I don't think there's any evidence suggesting that horse stamina was decreased for UO:R from t2a/early 2000.

I specifically remember war horses (from factions) were not only desired because they were special colors, but because they acted like horses on this shard do now (virtually infinite running).

Some time unknown to me after war horse/ethereal popularity exploded, regular store bought horses stamina was boosted; most likely so that they wouldn't be relatively worthless.

Horse stamina was discussed pretty heavily in the "do you like pvp" thread and I hope to see the changes to horses - both inability to mount while it is in combat and stamina reduction, soon. They will improve field PvP a ton
<green> grats pink and co. .... the 3 of you f---ing scrubs together can blow up a bard. IMPRESSIVE
Top

however if you attacked their horse it was a pia to get back on it.

rdash wrote:BLACKFOOT STAY AWAY FROM MY FRIENDS OR MEET A BLADE OF VANQUISH AND ADDITIONAL TACTICS

It is encouraging to see that the issue does indeed have the eye of the people in charge. Thank you, Derrick. You are on the verge of making this The Shard of Greatness.
Top

I messed around on the demo a bit and came up with these numbers:

Running at full speed on a horse for around 265 tiles gives you the fatigued message.
If you run for 30 tiles after that, making a total of 295 tiles, your horse gets so fatigued it can't move.
Top

Stuck wrote:I messed around on the demo a bit and came up with these numbers:

Running at full speed on a horse for around 265 tiles gives you the fatigued message.
If you run for 30 tiles after that, making a total of 295 tiles, your horse gets so fatigued it can't move.

Just to sort of put that into perspective, this is about 265+30 tiles. It's just about the equivalent of running across the compassion desert. 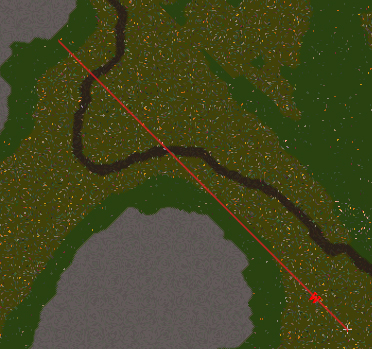 I hope to see this changed. Enough of the god mode horses running around.

The demo seems to be the way to go (sounds accurate from what I remember, but then again I was on foot most of the time).

Stuck wrote:I messed around on the demo a bit and came up with these numbers:

Running at full speed on a horse for around 265 tiles gives you the fatigued message.
If you run for 30 tiles after that, making a total of 295 tiles, your horse gets so fatigued it can't move.

Don't forget that weight plays a role in the rate the stamina is loss too.
mYm - Red Knees & Great Suction Capacity